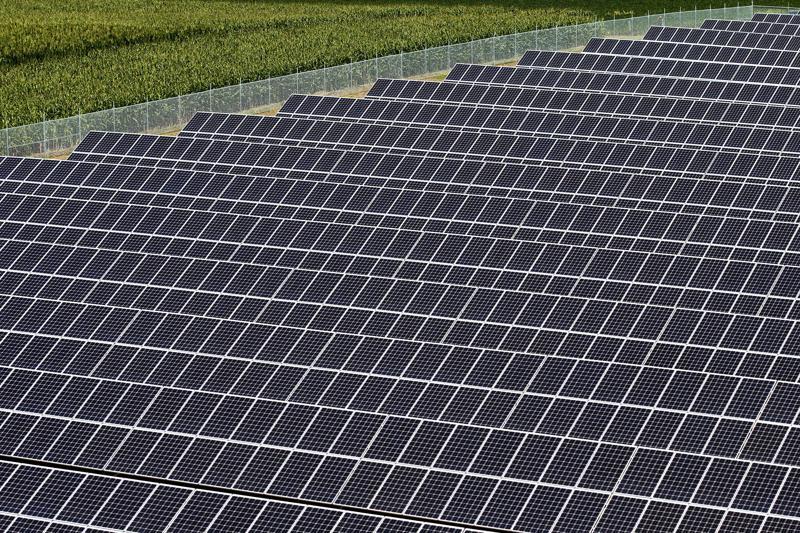 Farmers Electric Cooperative’s 800-kilowatt solar farm is on display in Kalona. Linn County regulators are considering a proposal for a 100-kilowatt solar project near Coggon. (The newspaper)

CEDAR RAPIDS – The Coggon Solar project will enter its third review next week, with one of the biggest remaining questions being: What will the setback distance for the solar panels be from neighboring properties?

County officials originally recommended a 300-foot setback. This was raised to a proposed height of 1,250 feet after the supervisor’s vote on the project on Monday — a distance the developer says could kill the project.

The project, a utility scale solar power plant 3 miles west of Coggon, is a partnership between Idaho’s Clenera and the Central Iowa Power Cooperative.

It aims to develop 100 megawatts of electricity over the project’s 35-year lifespan – enough to power 18,000 homes. The developer estimates that the project will offset about 300 million pounds of carbon dioxide over its lifetime.

Regulators are voting to rezon approximately 750 acres from agricultural to agricultural with an overlay of renewable energy. If finally approved, the overlay would be phased out after 35 years.

Conditions included the 1,250-foot setback and an increase in solar panel height from 18 to 28 inches.

Supervisor Stacey Walker voted against Monday over the added terms, saying the terms would be added without knowing the impact on the project.

Zumbach, who lives in Coggon, said he proposed the 1,200-foot setback because it gives neighboring properties more voice and flexibility.

“I don’t think most properties use an additional 950 feet, but that’s just my belief,” he said, adding that a 1,250-foot setback — the requirement for large animal feedlots in Iowa — “wasn’t accounted for.” kill this project.”

“I accepted having this project,” he said. “I just feel like the people who live next to them need to be represented too. As simple as that.”

But Clenera officials said such a setback would “kill the project.”

“It will destroy this project and every other project in Linn County,” said Jared Mckee, Clenera’s vice president of business development. “We will meet again and come back with something different, but negotiating with every non-participating landowner is not the way to go.”

Clenera development director Tom Fitzgerald added that a 1,250-foot setback wouldn’t work without acquiring more farmland, something opponents of the project have opposed since its inception.

“Coggon Solar is not a pig farm,” Fitzgerald said. “There is no smell or noise, there is minimal traffic and it does not adversely affect air quality. The original 300-foot setback already exceeds typical zone requirements.”

Fitzgerald offered an alternative, retaining the original 300-foot setback but installing at least 1,000 feet of screening — trees, bushes and hedges at least 8 feet tall — along the fence line of adjacent residences.

In comments about changing his vote from no to yes, Walker said he was trying to be fair to all parties.

“At the last meeting, I took the position that it is probably unwise to impose conditions that would force the applicant and others to find out what that means in such a short processing time,” Walker said. “I try to be as fair as possible.”

Walker told Clenera he wants to see creative solutions at the next meeting.

“Perhaps it is possible that non-participating landowners can place their own solar panels on their property at a reduced cost or discount,” Walker said. “I think that would be a good gesture.

“I also appreciate the demonstrations. … 1,250 feet seems excessive, but if it can be greater than the 300 feet, I would like the applicant to consider that.”

Supervisor Ben Rogers, who voted Monday for the 1,250 setback, said he does not support the setback if it kills the project.

“I supported it to have room for discussion,” Rogers said. “I think the claimant took the opportunity to explain to the board the implications of a setback of 1,250.

“With new information, this gives me pause. I need to readjust and recalibrate my own views and look at the data and I know that will disappoint many in this space.”

The Linn County Planning and Zoning Committee recommended in November, by a 6-to-1 vote, that supervisors reject the application after hours of public opposition to the project from residents.

Coggon Solar submitted its application for the project in July for properties south of Linn-Delaware Road, north of Hutchinson Road, west of Quality Road and east of Sutton Road.

The application includes an agricultural impact mitigation plan, a vegetation management plan, and a decommissioning plan that includes how the solar panels would be recycled or sold on the secondary market.

The filing also has terms, including a $1 million performance guarantee from Clenera to support its decommissioning plan and one stating that developers will be responsible for any storm-related cleanup.

Clenera’s Fitzgerald said Coggon Solar will be a $150 million capital investment that will require around 300 construction jobs at its peak.

On Monday, Coggon Solar signed a letter of intent with the Cedar Rapids and Iowa City Trades Council to build the project using local labor.

95 Towing chooses Regulation Promoting as its company and expands its operations into Broward...